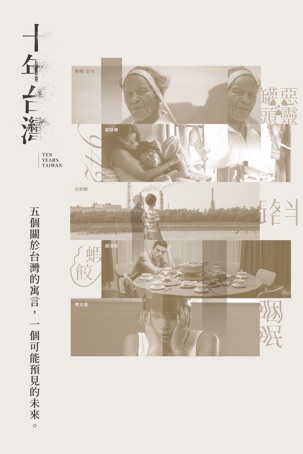 Running time: 108 mins
Released: 2019
Buy SD:
$10.98
Buy HD:
$13.98
Rent SD:
$5.98
Rent HD:
$5.98
What will our lives be like 10 years from now? Five up and coming Taiwanese directors each offer their own take in answering this question. In 2028, Taiwan is suffering from nuclear waste ("The Can of Anido"), migrant workers ("942"), industrial collapse ("Way Home"), low birth rates and diversity in families ("A Making-Of"), and insomnia ("The Sleep"). These destructive issues are the results of our present day. One man's old wounds return as environmental pollution disrupts societal relationships, blowing back as an attack on mankind. The film asks, how did things get this bad? And it asks once more, are these problems exclusive to Taiwan ten years from now? Of the five films, only "A Making Of" has a happy ending. The film is a part of the "10 Years" series being made throughout Asia. It began in 2015 in Hong Kong, and was followed by Ten Years Japan, Ten Years Thailand, and now, Ten Years Taiwan. Each director predicts a different "Taiwan in Ten Years", but every one of them is a summons for us in the present day.
Movie Price HD Movie Price SD Rental Price HD Rental Price SD