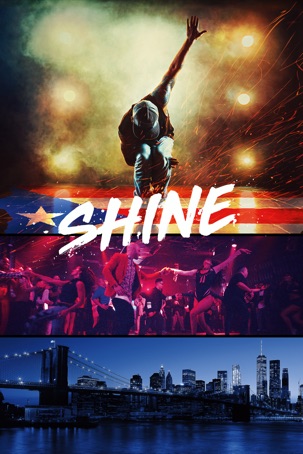 Running time: 96 mins
Released: 2018
Buy SD:
$29.99
Buy HD:
$49.99
Rent SD:
$29.99
Rent HD:
$39.99
SHINE is a story about the power of brotherhood, love, and redemption. It’s a story about dance, life, pride, soul and never forgetting where you come from. It’s present day and RALPHI MATAS (Jorge Burgos) is reflectively returning to New York’s El Barrio…his home. A home he turned his back on after his father RAMON MATAS (David Zayas), a famous salsa musician, has died in a building fire. Ralphi's work in London is moving him back to New York…but this time to assist with his company’s efforts to develop commercial real estate in the Barrio. Upon his return, Ralphi is reunited with his brother, JUNIOR (Gilbert Saldivar), who has become one of the city’s most elite dancers and unbeknownst to him, is working on the opposing end to slow gentrification in El Barrio, mainly by starting fires on new constructions. After settling in and closing the gap between his affluent mid-town lifestyle and his modest uptown roots, Ralphi tastes the love for the Barrio he left behind and his long lost brother Junior. During their childhood Ralphi and Junior were as close as brothers could be, learning music and dance at the local FUEGO dance studio. Ralphi reconnects with JOSIE (Kimberli Flores) who was part of his past, growing up on the same block in Spanish Harlem…that is, until he abandoned her, along with everything else. She now runs and has taken over FUEGO dance studio. Their story intertwines throughout, giving a sexual and cerebral love story that only adds to Ralphi’s conflicting feelings about returning home. Josie is hardworking and empathetic to the people of the Barrio and is vocal with Ralphi on what his company and others alike are doing to the neighborhood. As Ralphi works to reclaim what was once lost, new developments unfold regarding the lucrative deal that brought him back to NY, headed by his boss LINDA (Alysia Reiner) which now involves various properties including FUEGO DANCE STUDIO. At the same time, unbeknownst to Ralphi, is Junior’s brother who has been vandalizing new construction in order to preserve the old. One evening there is an encounter between Ralphi and Junior at a construction site, where they both learn of each other’s involvement on opposing ends of the neighborhood's development. In an unfortunate mishap, Junior is hit by a car and ends up severely injured and confined to a wheelchair. This cripples Ralphi with guilt and his emotions snowball so much so that he dives into Salsa, the music of his childhood…with a vengeance and starts to learn how he can couple the development efforts with his love for the Barrio and incorporate the spirit of the neighborhood. Ralphi spins out of control as he struggles to set his life back in order, reclaim all he has lost, and close the circles of the past. Junior, Josie, Ralphi, and Salsa amalgamate. The voice of his past echoes in his mind: 'we are connected from the very first beat to the very last echo.'
Movie Price HD Movie Price SD Rental Price HD Rental Price SD